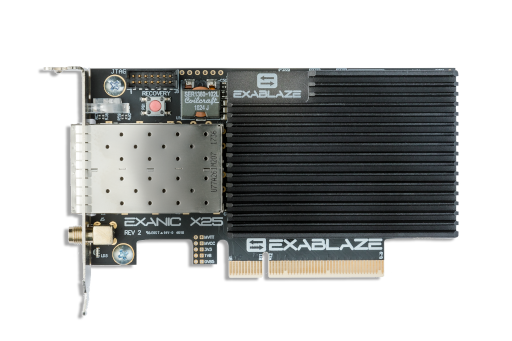 16 January 2020, Sydney, New York & London: With Cisco announcing its intention to acquire Exablaze in December, Exablaze, the leading global provider of ultra-low latency network devices, is launching two new network adapters: ExaNIC X25 and ExaNIC X100. In both live trading and benchmark tests the new network adapters proved to be the fastest available, and have set a new record for low-latency performance. The exceptional speed of the new Network Interface Cards (NICs) is due to the unique hardware, software and firmware architecture developed by Exablaze. The ExaNIC X25 is available now, while the ExaNIC X100 is expected to ship in late Q1.

Dr. Matthew Grosvenor, SVP of Technology at Exablaze, says: "There is a maxim in Exablaze - in order to be fast, we have to design speed into everything we develop: it's not enough to simply make old components go a bit faster. We must always start from a clean sheet. That's how we stay ahead."

He continues: "Every aspect of the ExaNIC X25 and X100 is optimized for low latency operations. From our unique cut-through receive path, to our pre-loaded TCP packet transmission capability, we have gone the extra mile to create cutting-edge technology for our clients."

In low latency trading and HFT minimizing the time it takes to send and receive network messages is critically important. Exablaze's achievement with the two new NICs is twofold: to provide significant speed improvements for sending and receiving messages, and to allow trading desks and firms to future-proof their NICs, by using flexible FPGA (field-programmable gate array) technology. FPGA-based NICs can be upgraded and customized 'in the field' (i.e. after installation), for example, to support high-speed, 25GbE connections and/or, by adding application-specific logic directly inside the NIC hardware to further reduce system latency.

Exablaze's low-latency and highly-programmable networking technologies have caught the eye of world-leading networking technology company Cisco Systems. Cisco recently announced plans to acquire Exablaze, including the ExaNIC product portfolio. The ExaNIC product series is expected to continue to grow under the Cisco banner when the acquisition is formally concluded later this year.

A key contributor to the unmatched latency performance of the ExaNIC X25 and X100 is the latest generation of Xilinx Ultrascale+ FPGA technology. The devices are built around Xilinx KU3P FPGAs, featuring 25Gb/s capable transceivers and 13Mb of on-chip ultra-RAM. The X25/X100 NICs optionally also ship with 4GB/9GB (respectively) of on-board DDR4 memory, allowing developers to build more powerful and diverse applications directly inside the devices using the ExaNIC Firmware Development Kit (FDK).

Media inquiries for Exablaze can be directed to: