This week I wanted to go over another useful feature of the ExaNIC - hardware based flow steering and load balancing (also known as flow hashing). The ExaNIC can steer received traffic to a number of userspace buffers based on rules over IP or MAC address. It can also be configured to calculate a hash that is a function of the IP headers and use this to balance traffic across the host's CPUs.

By default, all traffic for the ExaNIC arrives in a single ring buffer per port on the card that can be seen by the kernel as well as userspace applications. Our network device driver uses this buffer and integrates in with the rest of the Linux network stack. This allows the ExaNIC to be used like a regular network card. We also provide an API for mapping this buffer to userspace so that user applications can have access to the raw ethernet frames coming off the wire.

Under normal conditions, with flow steering disabled, this buffer will receive all traffic coming off the wire. This means that the kernel driver and user applications may be seing a whole bunch of traffic that isn't relevant. To reduce the load on the kernel and application, we can filter traffic using the ExaNICs onboard flow steering capability. The FPGA onboard the ExaNIC then makes decisions about where to transfer each incoming frame based on user defined rules. A big plus is that there is no latency overhead for enabling any number of flow steering rules.

This functionality can all be configured using our API, and amounts to the following:

The ExaNIC can steer traffic based on IP headers: 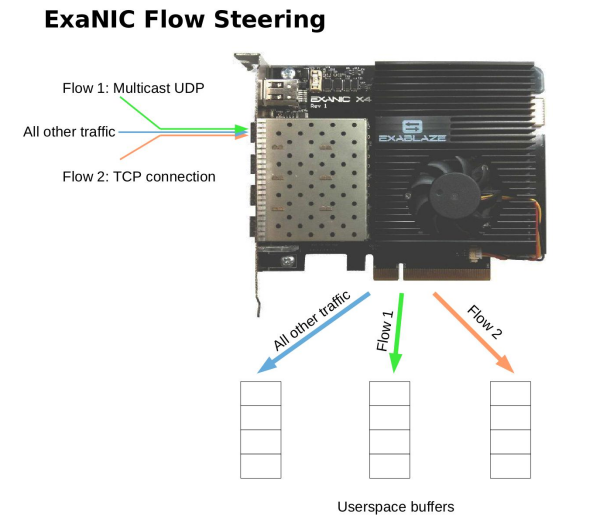 Rules can be very specific - requiring an exact match over all fields - or very broad, with a wildcard for any of the fields. For some examples:

So that's flow steering, now to load balancing. In some cases it is desirable for the NIC to balance load across multiple CPUs on the host. The ExaNIC is capable of doing this using its flow hashing functionality. When placed in flow hashing mode, the ExaNIC calculates a hash over the IP headers of incoming frames. This hash is calculated such that packets belonging to each IP flow will always end up in the same buffer. One example of how this could be used is in for monitoring the connections passing between network segments.

Anyway, that's enough for today.. As always, if you're interested in any of this stuff get in touch.